The Woodchester CaniX races took place over the weekend of the 8th and 9th of December, in the beautiful National Trust setting of Woodchester Mansion. The venue itself was a few miles out of Stroud and the parking and camping was in a car park set into the hillside just above the woodland. This was a very local race for us but we still managed to get lost using the Sat Nav instead of common sense and arrived slightly harassed!

The start of the race was about a five minute walk from the car park and it was fun struggling with the dogs down to the start chute, as they all knew they were racing and were raring to go. Luckily, the start of the 6 km course was uphill and with 2 dogs, the hill was hardly noticeable. It led you up into the woods above a valley, with wide dirt tracks which were perfect for allowing the faster runners to overtake.

The big uphill at the start – Photo courtesy of Chillpics

Then came the downhill. One of the steepest I’ve encountered with the 2 dog team, I had to hang on for dear life as other people with well trained and obedient dogs, simply skipped down happily with dogs either at the side of of them or behind them. I managed to get to the bottom with no mishaps and the track then opened out along the side of the valley allowing fantastic views as we made our way slowly down into the bottom of the valley and to the lake in the middle.

The homeward stretch of the route was through fields and alongside the lakes with a small stint on some boarded walks, which although narrow, were not slippery and actually great fun for the dogs as they wove between the trees. We even managed to pick up speed through this section.

The last kilometer was slightly uphill after passing by the magnificent mansion, which I found hard to ignore, as by then I quite fancied a little rest and to read a bit about the history of the house! But it was onwards and upwards for Team Thomas and we finished Saturday’s race happy and in awe of the course we had just completed.

Sunday’s race was slightly more eventful because instead of struggling down the steep downhill we managed it in style, the dogs were calm and relaxed and I actually felt like one of the people with obedient dogs for a change. So thrilled at having made it down the best part of the hill with ease, I made the mistake of thinking I could let them go for the last hundred feet of the downhill where it then flattened out. I simply could not keep up with them and as my feet slipped out behind me I realised I was not only going to fall, but was going to faceplant the ground!

I managed to avoid any serious injury to anything except my pride, as I had two witnesses to my nose dive who both not only asked if I was ok, but afterwards commented on how I had managed to fall so spectacularly and still got up smiling. I ran the whole of the rest of the course grinning because I loved the setting of the race and for me, this type of race is what makes it interesting. Woodchester was a real test of control and nerve with the downhills but also power and stamina to get up the other hills and over the 6 km of varied terrain. We might not have had the fastest time of the weekend (more like the slowest) but to date this is one of my favourite courses and I hope this becomes a firm fixture in the CaniX race calender.

As canicross and bikejor grow in popularity in the UK, many people find themselves being drawn into the sports by the opportunity it gives them to enjoy time with their dog. I have met so many people with completely different backgrounds who come together at the races, united by their love of their dog and the fun that canicross or bikejor provides. A lot of these people would consider themselves ‘amateurs’ because they don’t win every weekend and only really take part in the organised races for the social aspect of them.

But I think that success in these sports, as with other dog sports, relies very heavily on the relationship you have built with your dog. This relationship is important because I am always being asked ‘what is the best harness for canicross?’ or ‘what is the best harness for my dog?’ and the answer to both those questions can be found with you and your dog. I have three dogs, all of different breeds and temperaments, and have found that each suits a different type of running harness. It has taken me a long time to find what I think works best for them and I have tried a number of different styles of harness and running set-ups to find what works best for us. I think you need to study your dog, on and off lead to see how they move with no restriction and then you can understand the impact that putting them in a harness has on this movement.

It is for this reason that I stock such a wide range of harness types, as I feel no-one knows your dog better than you – in short – you are the ‘expert’ of your dog. You will notice if your dog doesn’t seem to be moving as comfortably as normal, as you spend more time than anyone else in the company of your dog and will spot the slight differences in gait that an incorrectly fitting harness or injury may cause. I always encourage people to try out a couple of different harnesses if they can and watch other peoples’ dogs running to see what might suit their own dogs’ running style.

Any person can say ‘well I use this on my dog and it’s the best’ but what they really mean is ‘I use this on my dog and I think it’s the best for my dog’ which may not necessarily be the best for your dog. Even if you are an ‘amateur’ in the sports, be confident in knowing you can see when your dog is comfortable and don’t allow yourself to be talked into a harness for your dog that you’re not sure is the best for your dog, just because someone more experienced has said it is the right one to get. That’s not to say don’t listen to advice and information that’s available on the equipment you can buy – just remember that you know your dog best, you are the ‘expert’ and trust your judgement to choose what will work best for you. 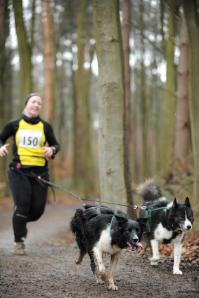