This blog will focus on the Zero DC Euro Short Harness and why it is one of our best selling harnesses for canicross, bikejor and even walking.

The Euro Short harness designed by Zero DC is very similar in some respects to other shorter harnesses on the market but it has the rounder neck shape which is designed to keep the backwards pull out of your dogs’ throat and onto the shoulder area, without restricting the dogs’ shoulder movement in any way. It also sits further down the back of the dog rather than just behind the shoulder joint. 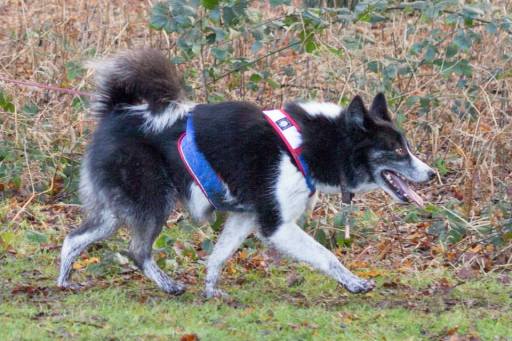 The Zero DC Short harness has wide material straps which spread the pull over a wider area and has a soft lining to help prevent rubbing, even in thin coated dogs. As with most harnesses, the neck is a fixed size and should fit snugly with a few fingers gap, not too loose. The Euro Short has two clips on adjustable webbing straps which attach on the strap over your dogs’ back and make putting this harness on and taking it off, very easy, even for wriggly dogs.

One of the best features of this harness, particularly for smaller dogs, is the small area of padding which extends beyond the back length of the harness, below the ring for attaching your bungee line clip to. This additional padding means that a metal clip which may normally have bounced on the dogs’ back if the line becomes slack, doesn’t cause any issues for your dog. 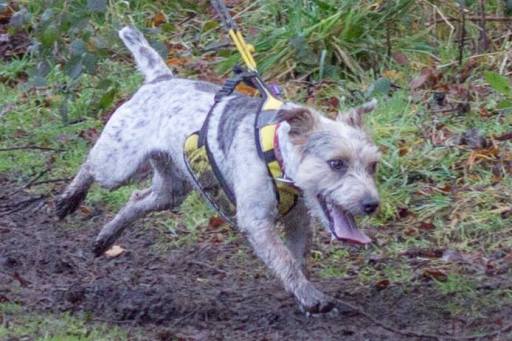 The Zero DC Short harness is well suited to smaller dogs but is suitable for all breeds, even giant breeds – Photo courtesy of Houndscape

I recommend this harness to owners who are unsure if their dog is going to pull out front or who already know their dog drops back by their side sometimes when running. The Euro Short harness is great for these dogs because it allows them to pull freely when they do want to run but won’t flap about like a long harness might if they drop back. It is also a good harness for dogs who run strongly but do not like the feel of a long harness by their tail or who may have a medical reason for favouring a shorter harness (i.e. a hip problem where it is better to keep any pressure away from the rear end of the dog). This harness rated very highly with the members of the Canine Massage Guild when I asked them to consider the different styles of harness because of it’s simple design and padding in the right places to protect your dog when pulling.

Finally, the Zero DC Euro harness comes in a wide range of sizes that cater from the smallest toy breeds right up to the giant breeds of dog and with eight different colour options available, it has proved very popular with people who want to colour co-ordinate their teams! It is a fantastic multi-purpose harness and as a result, we sell loads of these here at K9 Trail Time. 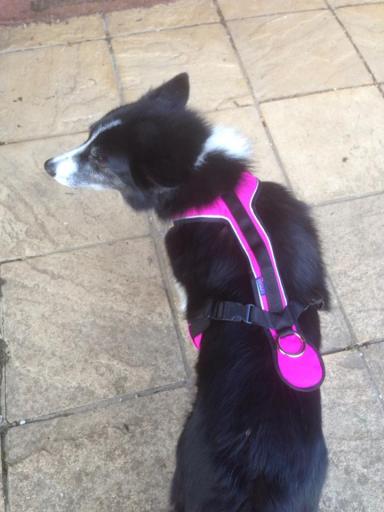 For more information on sizing or to buy please visit our website: (http://www.k9trailtime.com/shop/euro-short-zero-dc-sports-harness.html)

If you’re thinking of entering your first race, whether it be canicross, bikejor or scooter, there are a few things you should consider before you enter for the safety and happiness of you and your dog.

The first thing to consider – is your dog ready for the noise and stress of a race? If you have been training on your own or in very small groups, you need to think about how your dog will react when surround by lots of very excited dogs and their owners. Dogs can behave very differently when in a race environment and if you’re not sure how your dog might react, it may well be worth you attending a race with your dog as a spectator to begin with, to get a feel for how your dog will behave. 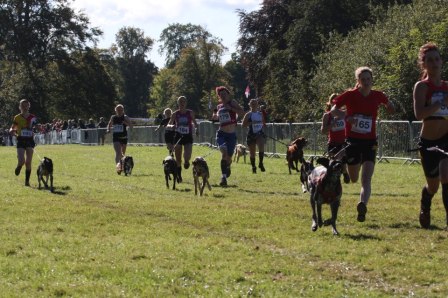 Is your dog ready for the stress of a start line? – Photo courtesy of tzruns.com

Have you done enough training? You might have run a few miles, a few times at home with your canine companion but you need to make sure your dog has done at least a dozen runs at the distance you are racing, to ensure you are both fit enough to race. There is more stress involved in racing and you will inevitably pick up a faster pace than during training at home. 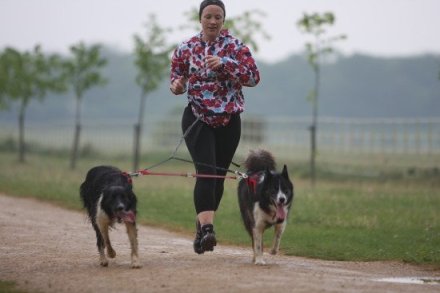 Do you have the right equipment? Certain races have rules regarding equipment from the specification of the belt for canicross to the length of the line. There are few restrictions on the type of harness you run your dog in, as every dog is an individual and the emphasis is on the dogs’ comfort and safety, but something that does not restrict movement in any way is a must.

Once you have decided you and your dog are ready, have done some training and have the right equipment to meet the race organisers’ rules, then you are ready to enter your first race. I have listed some more useful tips for racing below, but the main thing is to ensure the experience is fun for both you and your dog and soon enough you will be hooked!

Take water for yourself and your dog for after the race

A change of clothes (and trainers) is often handy as you may well get muddy!

If you want to be really prepared, take safety pins for numbers to pin on shirts and cable ties for bike and scooter numbers (although most organisers will have spares of these)

For more information on canicross, bikejor and scooter equipment see our website: http://www.k9trailtime.com

I wanted to write a quick blog about what has taken over our lives recently, we’ve been in and out of the vets now for nearly a month and it’s been hard to keep a sense of ‘normality’ while this has been going on.

It started the week after Crufts with our dog Donnie being sick and showing signs of a virus in the middle of the night. An emergency trip to our local vet and we seemed to get a grip on it, he improved a bit and we were sent home with some medication.

Then after another couple of days, when I still wasn’t happy with how he looked, he went  in again dehydrated and lethargic, so had to spend a night away from us on a drip. For most dog owners this would be stressful but for us, when Donnie tends to share the bed every night, it was awful. 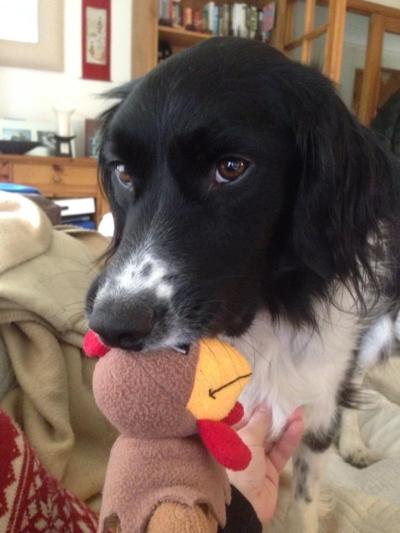 Donnie came home and things seemed to improve again, we even got to the stage where we began to take him out and get his routine back but after another two weeks and his progress was minimal, we went back for more tests.

I have to say at this point we hadn’t just been ignoring the problem, he’d had blood and urine tests every few days and he had been closely monitored, but nothing had changed dramatically and the levels being tested were all within the average boundaries. However, on this occasion a decline in his health was noted and he was actually being sick again.

Donnie was referred to a veterinary hospital nearby and they (along with our local vets) suggested a ACTH (adrenocorticotropic hormone) stimulation test to check for Addison’s Disease. To put it very simply Addison’s Disease is the common name for hypoadrenocorticism, or adrenal insufficiency and the adrenal glands situated on the kidneys do not produce the vital hormones necessary for normal kidney function. Symptoms are both vague and common in other ailments, making it extremely hard to diagnose.  The symptoms also ‘wax and wane’ which makes it appear resolved, when in fact the damage being done to the kidneys internally is continuing.

The test result came back positive and unequivocal – Donnie was suffering because he has developed Addison’s Disease. This is all still very new to us and we’ve been frantically researching the internet since the diagnosis. A website of particular use has been an American site (http://www.addisondogs.com) which has some fantastic information on the disease and answers a lot of questions. 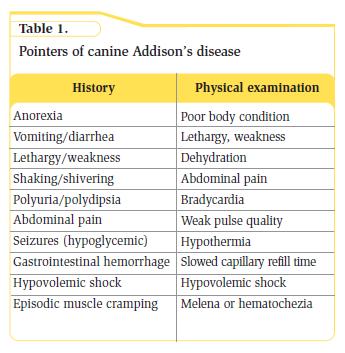 Looking at all the information available, it would appear that there is every chance Donnie can live a ‘normal’ life once we have found the right balance of medication, which can take up to six months. However, the majority of the cases the vets have seen are in dogs who lead ‘typical’ lives, not extremely active ones and certainly not lives where they are racing every other weekend for six or seven months of the year.

Addison’s Disease symptoms can be triggered by any ‘stress’ be that physical or mental, so we’ve been told to keep him calm and to (at least at this stage) avoid anything which will increase his heart rate by too much. Any additional strain on his system could cause Donnie to display the main symptoms of: Vomiting, Diarrhea, Lethargy, Lack of appetite, Tremors or shaking, Muscle weakness, Pain in hind quarters.

I don’t want to dwell too much on the illness itself but try to find a way for us now to move forward with the medication he has and hopefully get him back to some sort of ordinary routine. If this means he can no longer bikejor and canicross race then so be it, we will have to deal with each day as it comes and just prepare for providing him an active lifestyle suitable for keeping him happy with the condition he has. 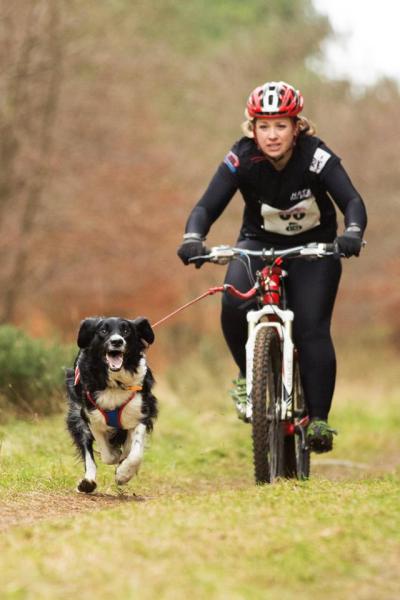 Donnie may well not be able to race in the bikejor again, we’ll just have to wait and see… Photo courtesy of Sled Dog Photo

So is this the end of an era for Donnie? I hope not, I’d like to think of this as the start of a new chapter in both his life and ours, where we might have to compromise and substitute some of his previous activity for something a bit more sedate. But if I know Donnie, whatever we end up doing, it will be done with 100% commitment and effort, regardless of any limitations we might now face.