Behaviour is one of the main reasons I started to look into canicross with my dog (originally I only had one!) because she is a husky cross collie, rescued as a stray and she suffered with separation anxiety when I first had her. I had tried many other methods of training with some success but just wanted her to be calm and happy, which seemed nearly impossible to begin with. A friend had suggested I try canicross and it was something I had never thought of because I didn’t consider myself a runner and wasn’t aware you could buy the hands free kit. Once I got started with the canicross I found that she was much calmer after her runs and much more relaxed about being left after her routine morning run. The other benefit I noticed, once we started to meet up with others, was that when we were canicrossing she wasn’t being reactive with other dogs. Initially, she will still try to eyeball other dogs when we first meet them but when we are running, she will run shoulder to shoulder with other dogs quite happily because she is focused on her job. What canicross allowed me to do was socialise her in a safe and controlled environment and has meant that not only is she a calmer dog at home, but she is also a calmer dog out and about. Canicrossing isn’t yet widely recognised as a sport but many dog owners are beginning to discover it and along with it, the benefits that canicross can have for your dogs’ behaviour. I’m not a qualified behaviourist but I’ve seen the effect of canicross on many, many dogs now and when it comes to behaviour, it seems to provide a secure outlet for a dogs’ energy which you don’t find with many other ‘doggy’ activities. So that is why I have chosen ‘behaviour’ as my canicross word associated with ‘B’ 🙂

Giving your dog a job can help improve behaviour

The very first instalment of our A-Z of canicross, according to us here at K9 Trail Time. Of course there are plenty of letters which could have many words associated with them and some that will be hard to find something relevant for, however this series of mini-blogs aims to take you through some of the more fundamental elements of canicross as we see it.

A is for Activity, being active with your dog is the primary objective of canicross for us. Too many people are relying on quick walks around the block to cater for their dogs’ exercise needs and often misjudge how much activity a dog needs to keep it happy and well-adjusted to fit in with the modern lifestyles we have. Often the dogs we share our homes with are working breeds that would have had a job they were bred to do and now we just expect them to behave like pets. This doesn’t suit all dogs and many need something to do to allow them an outlet for the energy which they would have used traditionally in their job. By keeping your dog active, whether that be canicrossing (which is my personal favourite for giving a dog a job to do) bikejor, dog scootering, agility, flyball or regular walks (of a decent quality to allow your dog to get tired), you will find your dog much more likely to be happy at home when you do need to go out and leave them. Canicross is by far the best way I’ve found to give my dogs the activity they need, in safe circumstances (on lead, building muscle in a controlled way) and the result of this activity is always tired and happy dogs. That’s why K9 Trail Time’s slogan is ‘Active Dogs Are Happy Dogs’ and why I’ve chosen to kick start the A-Z of Canicross with ‘activity’!

Recently I’ve heard a number of people say that they’re not interested in taking part in races with their dog. Reasons for this seem to be related to people feeling they will be too slow, not knowing how their dogs will react to a race situation or just not feeling that they want to travel for a race which might be less distance than they run at home. All of these things I can understand but I would like to use this blog to encourage people to come along to a race and have a go.

I personally never thought in a million years I would enjoy racing. I’ve never considered myself a runner and I hadn’t been on a bike since I was about 8 years old, so if you’d told me before I started all this that I’d be competing in European Championship canicross and bikejor events, I would have laughed in your face. 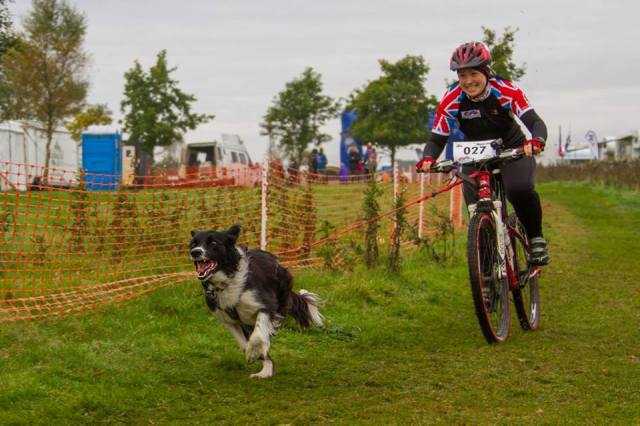 It was a friend of mine who mentioned the canicross racing to me and suggested that I should give it a go, in her words she described it as ‘wonderful madness’ and I liked the sound of that, so signed myself up. Of course I didn’t go to a race without having done some training first. I’d been running with my dogs for a few months before I entered my first race and I was pretty nervous about what to expect, not having been in a running race since I was in school.

The whole process was very laid back and put me at ease right from the start, with plenty of information about rules on the website when I entered and the race organisers holding a briefing for runners to explain how the race would be run. Nothing could have prepared me for the start line however! The sound of close to 100 dogs all excited and all raring to go is quite something to behold.

Mass starts are actually quite rare but even with a mass start the racers ensure their dogs have enough space – Photo courtesy of tzruns.com

At this point I’d like to reassure anyone who is thinking about racing, the dogs are generally all kept a good distance apart, with runners understanding that in situations like this the dogs’ excitement can lead to unwanted behaviours such as lunging, therefore the focus of the runners is always on the dogs.

The race itself (once you are off the start line) is generally very quiet and all you hear is the sounds of the dogs panting and runners or bikers puffing hard in their efforts. The odd directional command for the dog or warning to another competitor is all you should hear when you’re out on the trail unless you choose to start up a conversation with another runner (which has been known to happen in my case!).

One of my concerns was how my reactive dog would handle a situation in which lots of other dogs would be passing shoulder to shoulder, and knowing that I’m not a very quick runner, I knew there would be plenty of people overtaking me. What I found was that as long as I kept her under control at the start and just asked people to give me space when overtaking, that she has learned to accept other dogs passing very closely and in fact is focused on her ‘job’ and will run happily alongside dogs she would not tolerate standing with under normal circumstances.

I have now competed in well over 100 races and can honestly say I don’t take part for the prizes or the thrill of the race. I enter races to see new parts of the country, to run on trails I would otherwise never know to explore and also to meet up with the many like-minded friends I have made over the years. For me however, the main reason I race is the fun the dogs have when they are out doing the activities they love. It makes me so happy to see them excited and and also how relaxed they are and how well they sleep after a weekend away socialising and racing with friends.

The dogs may enjoy some of the prizes but they aren’t bothered by the rosettes, medals and trophies!

So if you are considering taking part in a canicross or bikejor race, my advice would be to go for it, if you don’t like it, you haven’t lost anything except the cost of a race weekend and if you do like it, you may just open up a whole new world of fun and friendship for both you and your dog.

Happy trails and hope to see you at an event soon!