I am always being asked how to get started in canicross and how to teach your dog to run out front of you when canicrossing and my answer always involves recommending people find themselves a group to go along to. The local canicross groups that have been set up in areas all over the UK and abroad are by far the best introduction to the sport of canicross you can get. Some of the bigger and more established groups now have kit bags with spare harnesses, waist belts and lines so you can try before you buy too. You and your dog will be welcomed along to a group run and treated as a friend from day one and if your dog is a little nervous or needs space then you can be assured that the canicross group will be understanding of this and be able to help you get your dog comfortable with a group run. By joining in with social runs most dogs will automatically learn to pull out in front too, as dogs seem to pick up canicross very quickly when they are in a group situation. I myself have run with dozens of different groups all over the UK and it’s great to be able to join up with others if you’re on holiday with your dog because you get to see parts of the country you might not otherwise know about. So because of how important the groups are for training, socialisation and for fun in canicross, I have chosen groups as my word associated with ‘G’ in the A-Z of Canicross. 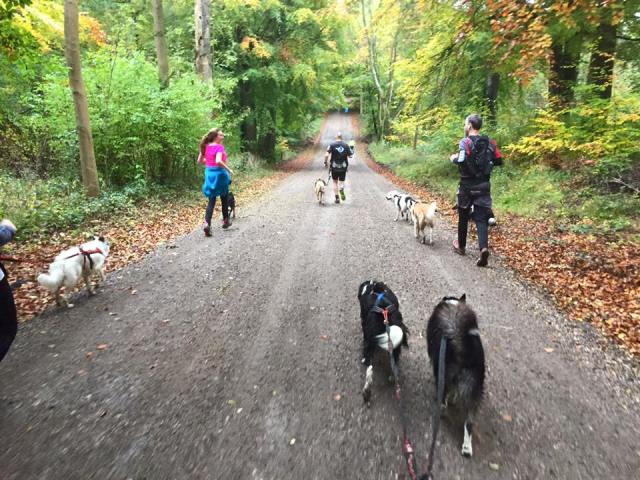 Groups are so important for training and socialisation in canicross

Dog welfare is of upmost importance to us here at K9 Trail Time and so we spoke to Dr Anne Carter and Emily Hall MRCVS who have been conducting a temperature monitoring study for Nottingham Trent University, with dogs who have been at some of the races we attend, hosted by the Canicross Midlands club.

The aim of the study is to try and discover what factors affect dogs core temperatures and potentially put them at risk of heatstroke or hyperthermia. The study is still in it’s early stages and results have yet to be published, as both Anne and Emily feel there is much more research to be done in this area and that they have only begun to scratch the surface of what needs to be looked into to give dog owners and in particular, owners of dogs who compete in sports,  a useful guide to help them prevent their dog from suffering hyperthermia.

Dr Anne Carter put together these notes for us so that we could share them with our followers but there will be more to follow due to the full study not having been completed yet. We have added additional notes not within the speech marks, which summarise the points as we see them.

Prior to the study it was noted…

“Dark coated, male dogs appear to be at higher risk of hyperthermia. This corresponds with findings from literature that suggest higher risk groups include: brachycephalic breeds, those with respiratory disorders, overweight dogs, and poorly conditioned dogs.”

So this suggests that dogs who are unfit and unused to exercising in higher temperatures will be more at risk than those who have been sensibly and gradually acclimatised to working in warmer temperatures. We have always advocated light training through the summer months for this reason but distances need to be kept shorter and measures taken to ensure your dog never over works in the heat.

“‘Knowing your dog’ is key. Some dogs appeared to be naturally hotter at both resting and post exercise temperature. Therefore, their normal range may be different to another dog. This doesn’t appear to be breed specific.”

Which is indicative of the individuality of the dogs measured in the study so far and would imply that it is very useful to understand your own dogs’ regular resting core temperature, so you can be aware of anything abnormal specific to your dog.

Both these temperatures were exceeded in (some) dogs after a 5km run, but dogs quickly returned to normal range.”

This would indicate that dogs very quickly reach internal body temperatures which would be considered abnormal and dangerous to dogs, however the fact the dogs return to normal very quickly and that there has been very little study done on this so far, seems to suggest that this is probably perfectly normal and as long as we are aware of our dogs’ limits, is not harming the dog in any way. This type of raise in body temperature is probably occurring in any daily activity we do with our dogs but we would not necessarily be aware of it because we wouldn’t be monitoring their core temperature so closely unless we were concerned.

“If heatstroke occurs, active cooling should be undertaken using lukewarm (not cold water), air con in the car, mist spray of fans. Cooling coats so far, have not been shown to be effective. Veterinary care should be sought immediately to improve survival chances (delays over 90 minutes increased fatality rates significantly in the literature).”

We discussed in great detail the things associated with heat stroke and the main signs of over heating are as follows: restlessness, seeking out cool areas/shade, looking to lie down, excessive panting, excess salivation and thick sticky saliva. Also look for glazed eyes, red or very pale pink (rather than healthy pink) gums, stiffness in movement which can lead to staggering and any anxiety or agitation. If your dogs displays any of these signs then it must be taken straight to a vet as any delay may cost your dog it’s life.

The main issue with heatstroke in dogs is shock, so even if you get your dog to a vet (ideally within 90 minutes of the dogs first showing signs of heatstroke) there are no guarantees that they will be able to undo the damage done to the internal organs by shock.

The things you can do to help your dog if it has been affected by the heat is to cool the underside of their body with cool but not cold water (shock damage can be increased by using ice water), ensure air flow over the dogs’ body i.e. with a fan or breeze in a car and don’t put anything over them which can trap the air in the dogs’ coat, so no wet towels, blankets or coats.

Remember that dogs lose heat through their paws, so boots can restrict a dogs’ ability to cool efficiently, therefore only use boots in cooler weather and never to protect your dogs feet from hot pavements, if it’s too hot for paws on pavements, it’s too hot full stop.

Dr Anne Carter and Emily Hall MRCVS will be continuing their studies throughout this dog sport season so if you would like to take part they will be at some (not all) of the Canicross Midlands race series and also some training runs, asking for volunteers. They have also provided this link on body temperature in racing greyhounds for anyone who is interested in a published study. It’s open access so free to all. http://journal.frontiersin.org/article/10.3389/fvets.2016.00053/full

We will be following the progress of this study and hope it will help to raise awareness of heatstroke for all dog owners not just those taking part in the dog sports.

Happy trails and if in doubt – don’t run!

I couldn’t write an A-Z of canicross without emphasising that the main reason for running with your dog should be the fun you will have doing it. I often hear people saying ‘I’m not fast enough’ or ‘I’m not fit enough’ to run with their dog, when the aim should be to get fitter with your dog and maybe get faster as a result (two more ‘F” words for you!). Even racing is generally about the fun you can have whilst taking part in an organised event and most people just enjoy being able to canicross on new trails with a bunch of other like-minded folk. There is also the social aspect for both dogs and humans that gathering canicrossers together can bring, and as I’ve mentioned previously, it’s a safe environment for dogs who might not be so great at being social, to be around other dogs and people from a distance. There is nothing quite like running with your furry pace maker for enjoyment and even when it’s a wet, muddy and miserable day, we always end up having fun canicrossing. So my word associated with the letter ‘F’ has to be fun!

The environment we are running our dogs in for canicross is very important, from the surfaces you are running on, to the weather you are running in, you need to be aware of all aspects of this when canicrossing. I always advise people it is better to choose trails which are all off road and if this is not possible then try to limit running on tarmac, as it can be damaging for joints in both you and your dog. I also try and pick routes with natural water sources on them, so that if it is warmer than I expected, then I have somewhere to safely water and cool off the dogs on our route. I’m not going to go into too much detail about temperature, as I could write pages on that itself, but be sensible about how warm it is when you run your dog, paying particular attention to the humidity, which can be very harmful for dogs. Included in environment is making sure you are being respectful of the surroundings you are canicrossing in too. Try not to spook other trail users, dogs and horses not used to seeing dogs attached to people can be quite nervous, and not everyone likes dogs so be mindful of not allowing your dog to invade someone else’s space while out and about. Any livestock you might encounter might also be scared by your dog running at them, even if they can’t chase them, so keep your dog under close control in fields. Finally, make sure you clear up after your dog and follow the countryside code, shutting gates behind you and ensuring you leave areas as you found them for others to enjoy. With so many things to consider about your environment when canicrossing, it was the obvious choice for the letter ‘E’ in the K9 Trail Time A-Z of canicross. 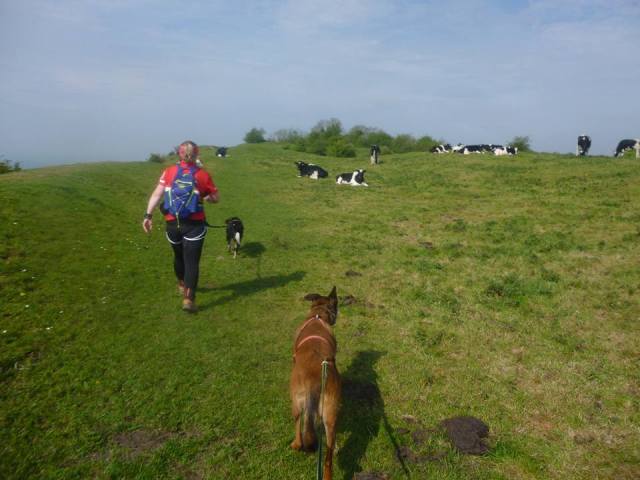 Be aware of everything in the environment you are canicrossing your dog in, from the surfaces and weather, to the livestock and people you might meet