Triathlon for dogs isn’t something that had been done before Tri Dog set up in the UK in 2016, probably because we have a climate which makes it very difficult to get the timing right for all three disciplines to be participated in at the same event. Traditionally the running and cycling elements of a triathlon are winter sports when dogs are involved, so that the dogs are running in cooler temperatures and are not likely to overheat. Of course this doesn’t relate so well to the open water swimming element and it is something we have considered at great length and have chosen our dates according to balancing these factors. 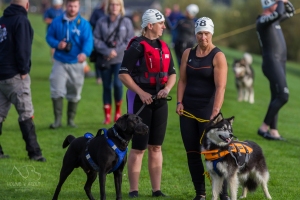 The group of people behind Tri Dog events in the UK have all had a wealth of competitive experience with running and cycling dogs but the swimming is something we have only been doing to maintain fitness in the summer. We have taken inspiration from a competition which has been running in Europe for 8 consecutive years now called ‘Iron Dog’ and using their model we have begun to offer a programme of training and events to develop triathlon for dogs in the UK, mainly based around the Midlands area.

The main elements of a Tri Dog event are:

Running with dogs is now more commonly known as canicross and is defined as cross country running with your dog attached to you. To take part in canicross races, your dog must have a correctly fitting harness and be attached via a bungee lead to a waistbelt worn by the person. Canicross is a fast growing sport in the UK and there have been specific races for people to take part in with their dogs for over 10 years now. 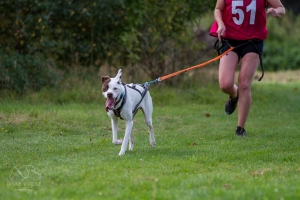 Canicross – running with your dog

Biking with dogs is known as bikejoring and although originates from the sled dog sports where people used bikes to keep their dogs fit in the spring and autumn when there was no snow for sledding, is now a sport in it’s own right. Riders usually have a mountain bike with an attachment which helps to keep the bungee line from falling in the wheel if the dog stops suddenly and the dog is in harness, attached to the bike via a bungee lead around the headstock of the bike. Bikejor is much faster than canicross and the top dog and rider combinations are reaching speeds of in excess of 30 mph on some of the trails. 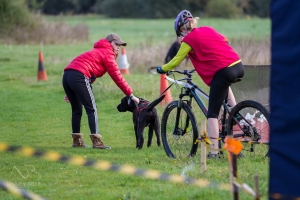 Bikejor – biking with your dog

Swimming with dogs hasn’t got a specific name and isn’t yet a recognised sport. For the Tri Dog events being brought to the UK we are requesting that your dog is attached to you via a lead of some description for safety. The idea is to try and get your dog to either swim alongside you in the open water or if you’ve got a really strong swimmer, they can even pull you if they are wearing a comfortable harness. 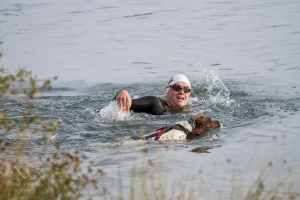 Swimming with your dog

The Tri Dog series of training and events got underway in October 2016 with the first training weekend which sold out before the event. We welcomed a group of owners and their dogs along to Croft Farm, near Tewkesbury to come and participate in all three disciplines and also practice some vital race skills.

The bikejor group concentrated on bike skills for the people and then once some basic skills were established and practiced, the dogs were brought into the training sessions. Depending on previous experience, some people were tackling a specially designed skills trail and some were getting confidence with their dog being attached to the bike and running out in front.

The canicross group focused on the skills necessary for racing in a triathlon, this is very important when it comes to racing with dogs as you are responsible for your dogs’ behaviour as well as your own! Canicrossers were passing each other side by side and then progressing to head on passes encouraging the dogs to ignore each other and stay calm. Race starts were also practiced and the transitions were explained and then completed by all those taking part. We are using stake out lines to attach the dogs to whilst the owner changes the equipment for each phase, this enables the dog to see the owner at all times but not interfere with any other dog or person, keeping everyone involved separate and safe.

The swimming group worked on getting the dogs confidently into the water and for some this was the first time they had experienced open water swimming with their dogs, so making the process as calm and enjoyable as possible was vital to ensure the dogs (and their owners) would be happy to do this again. For the swimming element of the triathlon, the welfare of the dogs is paramount and we do not encourage owners to force their dogs to swim, with this in mind there is a wade option for those whose dogs are struggling with the swim.

The swim is the part most people worry about

The training weekend was a resounding success and we have already had calls for more training sessions which we are hoping to provide in 2019. We have our next Triathlon event in less than two week now with the biggest entry we’ve seen since we began the events, so it looks like it will be a good one!

If you would like to know more about Tri Dog and for the event and training information please visit the Facebook page Tri Dog and our website http://www.tri-dog.com, we’d love to get more people participating and enjoying this very new combination of dog sports with their beloved pets.